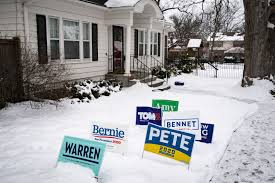 Since 1988, the “Des Moines Register” poll’s final results have accurately predicted the outcome of the state’s Democratic caucuses.

The final Des Moines Register/CNN/Mediacom poll of likely Iowa Democratic caucus-goers was scrapped at the last minute over the weekend – a stunning development any way you look at it.

With the 2020 Iowa caucuses taking place today, this particular poll in past years was regarded as a strong indicator of the caucus outcome.

They were set to be released Saturday night but complaints from Mayor Pete Buttigieg‘s campaign about how the poll was conducted led to the decision to drop it entirely.

According to “Politico,” one interviewer at the polling call center enlarged the font size on their monitor, which may have chopped off some names on the list of candidates — including Buttigieg’s in the interview in question.

That, in turn, led to fears that the poll results had been inadvertently tainted.

It has yet to be determined how many interviews may have been affected and whether other candidates’ names may have been left off of the lists read to respondents in the course of conducting the poll.

CNN released the following statement over the weekend: 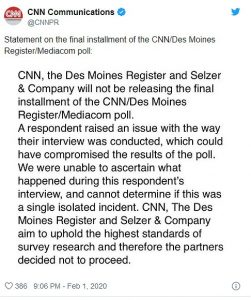 The ordeal is undoubtedly an embarrassment for The Des Moines Register, a widely respected newspaper.