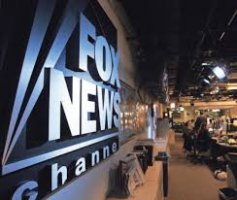 Fox News primetime and “Fox and Friends” since 2017 have been the most reliable mouthpieces for whatever is coming out of the White House.

The feedback loop has been strong as a tweet is issued, FOX dutifully and gravely reports on the tweet and the report is then cited in another tweet by the original Tweeter-in-Chief.

So Fox News could hardly ignore Friday’s Trump declaration that the coronavirus is a national emergency.

All talk of media conspiracy and “Democratic hoaxes” which dominated the cable network for week suddenly evaporated.

On his program on Friday, [Sean] Hannity — the most watched figure on cable news — lauded the president’s handling of what the host is now, belatedly, referring to as a “crisis.”

“Tonight, we are witnessing what will be a massive paradigm shift in the future of disease control and prevention,” he said. “A bold, new precedent is being set, the world will once again benefit greatly from America’s leadership. . . . The federal government, state governments, private businesses, top hospitals all coming together, under the president’s leadership, to stem the tide of the coronavirus.”

Just a week ago, Hannity shrugged at the pandemic. “So far in the United States, there’s been around 30 deaths, most of which came from one nursing home in the state of Washington,” he said last Tuesday. “Healthy people, generally, 99 percent recover very fast, even if they contract it.”

of comparison, he added: “Twenty-six people were shot in Chicago alone over the weekend. I doubt you heard about it. You notice there’s no widespread hysteria about violence in Chicago. And this has gone on for years and years. By the way, Democratic-run cities, we see a lot of that.”

He just couldn’t help himself, what with Chicago being the favored whipping boy of the typical Fox male viewer. (We know a few and the “whaddaboutism” in them is strong.)

[Laura] Ingraham, whose program follows Hannity’s, also seems to have had a fast-dawning recognition that the social and economic dislocation of the virus was more than just a Democratic talking point wielded against the president.

She kept at it through last Tuesday when, in front of a graphic reading “Trump confronts the panic pushers,” Ingraham said, “The public in some ways seems a lot more levelheaded than the so-called experts. . . . The facts are actually pretty reassuring, but you’d never know it watching all this stuff.”

By Wednesday, after Trump announced a travel ban on people from the European Union, Ingraham had started calling the pandemic “this dangerous health care crisis” She characterized warnings issued by National Institute of Allergy and Infectious Diseases head Anthony S. Fauci about the potential spread of the disease as “sobering and scary to hear.”

We already know how Trish Regan’s odious commentary claiming the virus emergency was a Democratic attempt at a second impeachment played out.

She’s off the air indefinitely.

But then her ratings sucked anyway.

He, too, blamed the “corrupt” media. But in a monologue that many took at an indirect scolding of the president, he also complained that “none of our leaders helped us to take it seriously. . . . People you trust, people you probably voted for, have spent weeks minimizing what is clearly a very serious problem. It’s just partisan politics, they say. ‘Calm down. In the end, this is just like the flu and people die from that every year. Coronavirus will pass, and when it does, we will feel foolish for worrying about it.’ That’s their position. . . . But they’re wrong.”

Meanwhile, his network has been a petri dish for misinformation about the disease.

In comments downplaying the pandemic on March 7, Jeanine Pirro, who hosts a Saturday-night show on Fox News, offered, “All the talk about coronavirus being so much more deadly [than the flu] doesn’t reflect reality.” She reiterated Trump’s comment that the infection rate will drop “as the weather warms.”

The first statement is wrong; the second is unclear. Although the coronavirus’s mortality rate varies by country, early observations suggest it is 30 to 40 times as deadly as common flu strains. In addition, scientists are unsure whether warmer weather will slow the transmission of the disease, though it does in flu pandemics.

On the “Fox & Friends” program Friday, Liberty University President Jerry Falwell Jr. spun out a meandering tale advancing the baseless notion that the coronavirus was designed by North Korean and Chinese scientists to harm Americans.

Then on Sunday, Rep. Devin Nunes (R-Calif.) appeared on Fox News and urged Americans to “stop panicking” and for those who are healthy to “just go out.”

Said Nunes: “There’s a lot of concerns with the economy here because people are scared to go out. But I will just say one of the things you can do if you’re healthy, you and your family, it’s a great time to just go out, go to a local restaurant.”

We don’t count this as a sudden turn to the responsible by FOX News.

This is a pivot mandated by what’s coming out of the White House.

And when the White House pivots, expect these people to do the same.

They are the furthest thing from journalists.