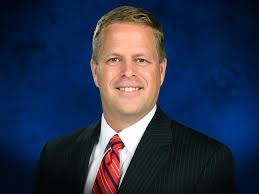 Weekend meteorologist Brooks Tomlin is evidently out the door at Fox-owned WOFL in Orlando, we hear from a NewsBlueser.

While his station bio remains up on the WOFL website, both of his station social media account have been yanked.

Tomlin, who’s been with the station for several years, previously spent four years in Australia, working in that nation’s government meteorology office.

Word is he was sick of the weekend double shift in Orlando.

And who wouldn’t be?

Prior to Australia, Brooks worked at television stations in Huntsville, Jacksonville, Baltimore, Philadelphia and Charleston, S.C.