A book ends and there are new beginnings….

And in Baltimore, it evidently takes two people to replace the just-departed Donna Hamilton. (See next story) 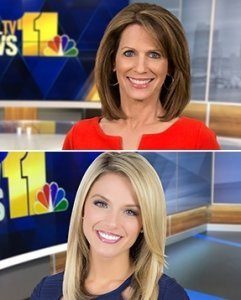 Veteran investigative reporter and anchor Deborah Weiner is moving into a fulltime anchor role at Hearst’s WBAL, joining Stan Stovall weeknights as the co-anchor of 6 and 11pm newscasts.

Ashley Hinson, who isn’t even in Baltimore yet, is coming from Scripps’ WPTV in West Palm Beach, FL to anchor the 5pm newscast and “WBAL-TV 11 News at 10pm” on MeTV with Andre Hepkins.

And they just couldn’t be more thrilled.

“We are thrilled to have Deborah join Stan Stovall at the anchor desk,” said Dan Joerres, president and general manager of WBAL. “Her 16 years with WBAL-TV 11 as a breaking news anchor and member of the 11 News I-Team have established her as a newsroom leader, making her a great fit for this position.”

Weiner, who is a Baltimore native, joined WBAL in 2002.

She will continue her investigative reporter role while taking on her new anchor duties.

Hinson is a Penn State grad….so we approve.