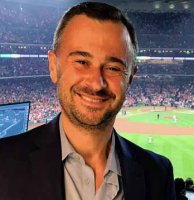 Houston blogger Mike McGuff reports that just as May sweeps wrap up and Graham Media’s KPRC claims victory, the station is losing its assistant news director

Although he’s not saying just yet what his second act is, Mike Friedrich is leaving the station, Houston and the tv news business to move to Annapolis, MD where he is just a four-hour drive from his hometown of Pittsburgh.

He said it…not us.

He’s held the No.2 position at the station for four years.
“For me, it’s just time for me to blaze my own trail doing something else,” he added. “After I complete my move and finish my ‘summer school,’ I plan on taking the rest of the summer off, and getting started after Labor Day.”

He previously worked in Washington, DC, Baltimore and at CNN Newsource.