Talk about “Breathless in Atlanta!” 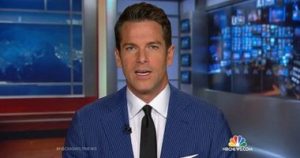 This is about the third or fourth “confirmation” that former MSNBC and CNN anchor Thomas Roberts has been hired by Meredith’s WGCL in Atlanta as its new main anchor.

Someone in the CBS46 PR department evidently can’t believe the station landed a guy with a halfway decent reputation and just keeps pumping out press releases.

Robert will co-anchor and early and late evening newscasts as well as the 9 o’clock news on Peachtree TV.

He replaces Ben Swan, who was fired several months back when the station discovered he was preparing to relaunch his junior grade “Infowars” clone for the Georgia tinfoil-hat crowd.

So Meredith plans to wring every last bit of value out of their marquee hire.

“Thomas is a top shelf journalist and anchor with a long track record of success at every level: network, national cable and most importantly local news. His natural talent, leadership and extensive experience in Atlanta make him the perfect fit for where we’re going as an organization,” said CBS46 news director Steve Doerr.

Roberts will sit alongside anchor Sharon Reed who Doerr put to good use in Cleveland 14 years ago by having her pose nude along with several hundred other folks for some “artist’s” idea of conceptual art.

So it’s a balanced team, evidently.