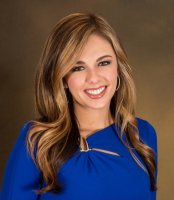 Bryanna Gallagher joins the news team at Tribune’s WPMT in Harrisburg, PA, where she will be a reporter.

Previously, Gallagher spent a year and a half as the weekday evening news anchor/producer for Northwest Broadcasting’s WICZ in Binghamton, NY.

She’s a Temple grad who interned in Philadelphia and New Jersey radio news before making the transition to television in Binghamton.