Nod yes, quickly – we don’t want to hurt any feelings. 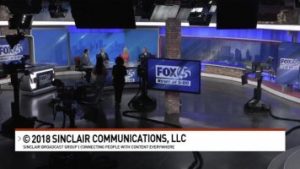 Sinclair flagship WBFF in Baltimore got a complete studio makeover which, they tell us, puts the latest technology to work while embracing and celebrating Baltimore’s heritage.

Three LED arrays with a large storytelling wall in the anchor area;

A vertical video wall along with a moveable weather pod in the weather area;

The lifestyle set has three, 75” monitors which allow for easy branding;

And faux brick because….well, there are a lot of brick facades around Bal-mer.

And our favorite feature: an artistic interpretation of electrical analog symbols to honor of the founder of Sinclair Broadcast Group, Julian Sinclair Smith, who began his career as an electrical engineer before becoming a television executive, where he pioneered in creating shell companies and cost-cutting.

The tears are welling up.