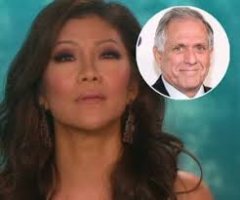 Later in the day “The Talk” went on without regular host Julie Chen as it kicked off its ninth season.

She’ll be taking an unspecified amount of time off

Panelist Sharon Osbourne took the lead:
“First of all, I want to say that whatever times I have had of hardship over the last eight years, Julie has always been there for me. She’s been a friend. she is somebody who I admire and respect greatly. And it’s very embarrassing and upsetting to have to talk about her husband, but we do.”
“[H]e’s not been convicted of any crime, but obviously the man has a problem.”

Co-host and program co-creator Sara Gilbert chimed in:
“This is an important time in our culture and just because this hits close to home, it doesn’t change this story. All women’s stories matter and these women’s stories matter. You know, this is very serious and the appropriate actions need to take place. And so I am happy when women are heard because for a long time, they haven’t been.”

It’s been quite a year for Gilbert, who was a driving force in the reboot of “Roseanne” which ultimately went down in flames due to the star’s ill-considered social media habits.

Gilbert managed to save that one.

Now, with a new broom coming to CBS, she may get to work her magic again.