Raycom’s WOIO in Cleveland, OH rolled out its new 9am show called “Sunnyside Up,” which has been available on “digital only” for a year.

It’s not a traditional newscast, though it has Jeff Tanchak with weather updates. 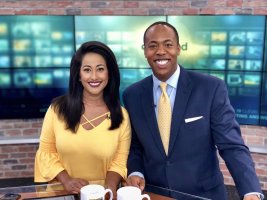 The station’s morning anchors, Neeha Curtis and Julian Glover, host the show, and it’s more about the main topics and what viewers think.

The show takes place in the station’s street level studio at E. 12th and Chester, which has not been used in 20 years or so for its morning news.