50 years at the same television station.

Now that is a person who has earned the title “dean” of whatever the hell it was he/she has been/is doing at that station. 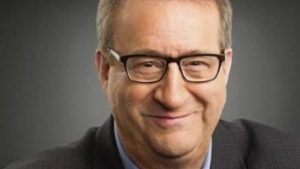 In the case of Mark Rosen, it’s being a sports anchor for CBS-owned WCCO in Minneapolis.

And 50 years is a nice round number to hang it up on.

It’s not like Rosen is pulling a disappearing act overnight.

He’ll stick around until next April so he can be part of the March Madness hysteria that overtakes the sports world and distracts entire companies with bracket obsessions.

” … I’ve had the best seat in the house for so many years,” Rosen said in WCCO’s announcement. “I’m thankful for the opportunity and the trust of Minnesota’s die-hard sports fans.”

Rosen, who took a leave of absence this past summer to be with his wife who is battling cancer, started at WCCO when he will still in high school.

Half a century’s worth.