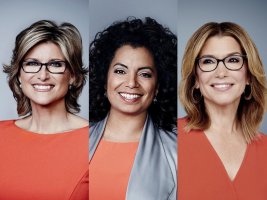 Say goodbye to “Across America With Carol Costello”, “Michaela” (Pereira) and “Crime & Justice With Ashleigh Banfield.”

All three programs were cancelled by HLN, the junior sibling of CNN and the three veteran hosts cut loose.

They will all sign off October 26th, and a new lineup will kick in October 29th.

Still on the schedule: “Morning Express with Robin Meade”, which will become a six-hour marathon.

It’s a far-ranging retrenchment, as the cancelled programs were all LA-based while Meade is at the home office in Atlanta.

Between 12 and 15 production and editorial positions in New York and Los Angeles will be affected by the cancellations.

Exactly how is unclear.

Evidently, HLN paid the price for not copying the “All Trump, All The Time” format of the mothership as well as MSNBC and Fox News.

This is the umpteenth course correction for HLN, which, in the beginning, featured 30-minute newscasts and shorter stories.

Escaping the wreckage is S.E. Cupp, whose nightly program was shifted to a single weekend edition on CNN.