Chicago viewers lost it over a social media post on Disney’s WLS Facebook page that appeared to make light of the Sears bankruptcy filing Monday. 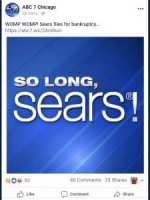 “WOMP WOMP! Sears files for bankruptcy . . .” appeared at the top of the posting that simply read “So long, Sears!”

Does the self-important bully Corey Lewandowski work at Channel 7?

The gleeful tone of the post struck many as insensitive to the plight of those losing their jobs with the 132-year-old company.

WLS eventually deleted it but, you know, crap lives on forever in the dark corners of the interwebs.

“We reposted our Sears story several times during the day,” a station spokeswoman lamely explained. “When we noticed one of the posts was misinterpreted, we took it down. We apologize to any of our Facebook followers who were offended.”

If anybody is offended by our pointing out the jackassery of the initial post, we apologize. Semi-sincerely.

FUN FACT: WLS got its call letters when the radio station was own by Sears Roebuck way back in the day.