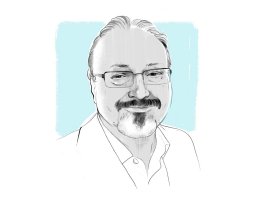 It was received by his editor the day after Khashoggi disappeared.

Its title: “What the Arab world needs most is free expression.”

The Arab world was ripe with hope during the spring of 2011.

Journalists, academics and the general population were brimming with expectations of a bright and free Arab society within their respective countries.

They expected to be emancipated from the hegemony of their governments and the consistent interventions and censorship of information.

These expectations were quickly shattered; these societies either fell back to the old status quo or faced even harsher conditions than before.
…
My dear friend, the prominent Saudi writer Saleh al-Shehi, wrote one of the most famous columns ever published in the Saudi press.

He unfortunately is now serving an unwarranted five-year prison sentence for supposed comments contrary to the Saudi establishment.…
The Arab world is facing its own version of an Iron Curtain, imposed not by external actors but through domestic forces vying for power.

During the Cold War, Radio Free Europe, which grew over the years into a critical institution, played an important role in fostering and sustaining the hope of freedom.

Arabs need something similar.…
The Arab world needs a modern version of the old transnational media so citizens can be informed about global events.

More important, we need to provide a platform for Arab voices. We suffer from poverty, mismanagement and poor education.

Through the creation of an independent international forum, isolated from the influence of nationalist governments spreading hate through propaganda, ordinary people in the Arab world would be able to address the structural problems their societies face.

In this country, we take a free press for granted.

And far too many citizens are willing to sacrifice it because it annoys them.

A recent poll showed that 43% of a certain political part would be happy to give the Chief Executive the power to shut down media outlets.

We’ve become so casual about our free press that far too many of our citizens accept the “enemy of the people” rhetoric and mindlessly join in, alternately with cries of “Lock her up.”

Jamal Khashoggi’s life was taken because he exercised the best a free press could be.