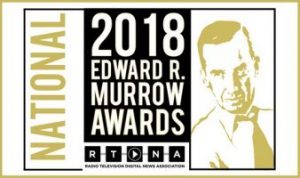 Well the tuxes and cocktail frocks are being dusted off and, in some case, being let out a little  for the big bash next Monday night, when RTDNA rolls out its 2018 Edward R. Murrow Awards gala.

Don’t look for tickets. 500 swells have already snapped up all the tickets.

This is the 47th year that RTDNA has been honoring outstanding electronic journalism – and celebrating itself.

And, as ever, RTDNA thanks the generous sponsors of the 2018 Edward R. Murrow Awards, including: CBS News, CNN, Hearst Television, TEGNA who are all Diamond Sponsors;

Then there are Platinum Sponsors ABC News and Netflix;

At the Silver Sponsor level we have NBC News, Nexstar, NPR, Cox Media Group/WSB-TV, “The Washington Post”  and the Charles Koch Institute;

And then at the Red Carpet…..wait, what?

Is this the Charles Koch who is one of the Koch Brothers, two of the nation’s largest political contributors, and dark money purveyors through their Americans for Prosperity?

And even though the sponsorship level is a relatively modest $7,000, is this really appropriate?

Should a national journalism organization like RTDNA take money from a group closely linked to such political partisans?

Asking for a couple of friends.