We were among the many who eagerly anticipated the return of “Murphy Brown” to the airwaves with its history of sharp writing, biting humor and talented actors.

“Murphy Brown” is back.

We’re still waiting for the rest.

Maybe the Couric Woman will snap the streak of thus-far predictable and rather tiresome “comedy” on the show.

We’re not holding our breath. 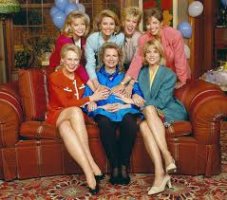 Katie Couric will make her second appearance on the CBS program November 8th.

In the episode, Candice Bergen’s Murphy Brown and Faith Ford’s Corky run into Couric, who is hosting a lifetime achievement event.

The appearance of real tv newspeople was one of the highlights during Murphy Brown’s original run and Couric was among them back then.

Along with Paula Zahn, Joan Lunden and a few others.

Maybe if they book Dan Quayle….and then have him confronted by Murphy’s son Avery….

You had to be there.