In North Dakota, thousands of Native American voters may be prevented from voting next week in a key Senate race because of an ugly technicality.

In Georgia, hundreds of thousands of citizens were “purged” from the voting rolls in what election-law experts have called the worst disenfranchisement of voters in modern American history.

As an added bonus, the guy who did the purging is also the Republican candidate for governor.

And in Kansas, the majority-Hispanic residents of Dodge City can no longer vote in their community after its single polling place was closed. 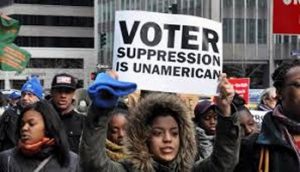 So what might be that undercovered – oh hell, let’s face it, the story is being ignored by tv news– is voter suppression.

For all their resources, the broadcast and cable networks are (rightfully) focused on a mail bomb terrorist and an anti-Semitic jerk with too many guns and imagined grievances.

Andrew Tyndall, who closely tracks network news for his well-respected Tyndall Report newsletter and website, has a plausible theory about why.

“The network news divisions have not worked out how to cover politics without following the agenda set by President Trump,” he told me by email. “That’s not to say their coverage is pro-Trump, since they will use his agenda to present him in both a positive and negative light. But it does mean that they find it difficult to present politics as being about anything except him.”

Since Labor Day, Tyndall told me last week, the three broadcast networks (CBS, NBC and ABC) together had done only a handful of stories — fewer than 10, all told — on threats to voting rights.

And the very plausible reason for this is pathetic.

“They do not conceive that following his agenda is a problem: his larger-than-life persona, his incendiary sound bites, and the strength of viewers’ reactions to him (both pro and con) make him a perfect fit for television journalism as it is currently practiced,” he said.

And while national newspapers like the Times and the Post and “New Yorker” magazine have devoted quote a bit of ink to the voter suppression story, those newspapers don’t draw the vast majority of people.

The problem is that the average American citizen may not read the New Yorker — but he or she is much more likely to watch the evening news.

As Pew Research put it recently, those tightly edited half hours are still “appointment viewing” for many millions of Americans.

And they still are regarded by many as relatively unbiased. In other words, they have important credibility.

Bottom line: The networks all have time for their “Made in America” and “Inspiring America” feel-good pieces.

Dump them and do some real news – like the very real threat of voter suppression being blatantly practiced in too many parts of the country.