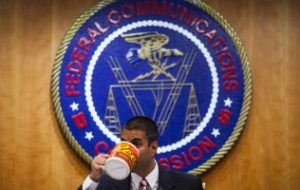 Devoted fans of industry lobbyist/FCC Chair Ajit Pai will be pleased to hear that the consumer-hostile boss plans to stick around the FCC for a bit longer.

Quite a bit if he has his way.

The man who gave us the death notice for net neutrality, and waffled long and agonizingly over the Sinclair-Tribune mega-merger is bravely facing what some are predicting will be a Democratic takeover of the House in a couple of weeks.

Pai probably is well aware of the Democrats’ long history of snatching defeat from the jaws of victory and figures the odds just might be in his favor.

And even if the blue wave materializes, Pai might be figuring that the end of the Sinclair-Trib buys him some brownie points with Dems who have been tough on Pai over network neutrality and media ownership deregulation.

On the other hand, if Dems were paying attention, it was Sinclair’s arrogant, bad-faith wheeling-and-dealing and general flim-flammery with the commission that finally pushed Pai from being an eager advocate of the deal to a disgusted critic suddenly tired of playing 3-card monte with the guys from Hunt Valley, MD.