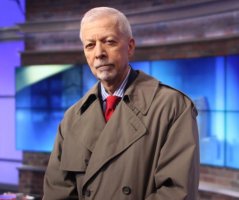 The dusty trench coast is going back in the closet and Carl Monday is off to new adventures.

Cleveland’s longtime tv investigative reporter is parting ways with Raycom’s WOIO sometime in the next couple of months – which kind of depends on when Gray completes its takeover of Raycom.

“When I signed on in early 2007, the bosses at 19 Action News asked if I were willing to work three years. Nearly 12 years later, I’m still here.”

“It’s been a blast exposing government waste, consumer fraud, and corruption in Cleveland here at Channel 19. Yes, even the marathon edits, midnight surveillance and crazy confrontations. Thanks to everyone who helped make it possible.”

“But it’s time to push the re-set button. I haven’t had a day off between jobs in 46 years in the investigative news business.”

Monday made his name as the I-Team investigator at WJW Channel 8 for 22 years starting in 1979. He moved to WKYC Channel 3 in 2001 before joining Channel 19.