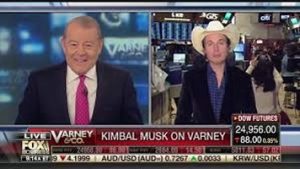 Musk, a member of the Tesla board, was supposed to be on with Varney to talk about the company’s new board chair Robyn Denholm.

Musk, evidently striving to make his brother, Tesla CEO Elon look normal, instead wanted to talk about something called “Plant a Seed Day.”

“You are on the board at Tesla,” Varney said. “And you’ve got a new chair. Have you heard anything from her? Is she laying down law?”

Somehow, we kept thinking of early Keanu Reeves as we watched the interview unfold – or unravel.

“I want to know what’s going on at Tesla with the new board chair, and you are on the boar. Can you answer the question? What is she doing? What do you know that she’s doing so far?

Keanu…uh…Kimbal wasn’t to be denied.
“What I’d like to share I’m so happy about the future of Tesla. And plant a seed day in 2019 will be a way for companies across America to participate.”

Varney wrapped up the segment quickly, insisting he would not be used.

Then a couple of hours later, he re-ran the segment because, as every consultant with 20/20 hindsight would tell us, bad interviews make great television

And this was Varney’s most memorable moment in quite some time.