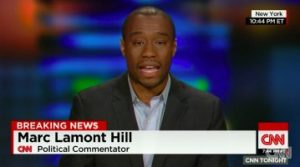 Say goodbye to opinionated gasbag Marc Lamont Hill, who’s been dumped by CNN after his anti-Israel comments made in a speech at the UN went viral.

Hill urged countries to boycott Israel in a Wednesday speech, calling for a “free Palestine from the river to the sea.”

His comments sparked an immediate backlash, with many noting “from the river to the sea” is a phrase used by Hamas and other anti-Israel terror groups.

His comments were condemned as anti-Semitic by the National Council of Young Israel and Anti-Defamation League.

Hill said his words, borrowed as they were from anti-Israel sources, were misconstrued.

One less bloviator to endure.

Until CNN finds another one.