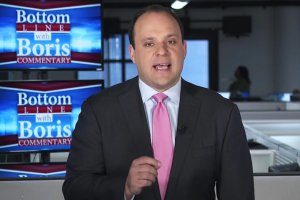 Sinclair Broadcasting evidently got more blowback than it bargained for when “chief political analyst” Boris Epshteyn was forced onto local Sinclair station newscasts earlier this week and proceeded to deliver a full-throated defense of the use of tear gas by the Border Patrol on the migrants on the other side of the border.

Because Sinclair, who hired Epshteyn after his brief career in the Trump White House and then proceeded to make his nine weekly commentaries required segments on the Sinclair stations that do news, is now trying to distance itself from Epshteyn’s commentary. 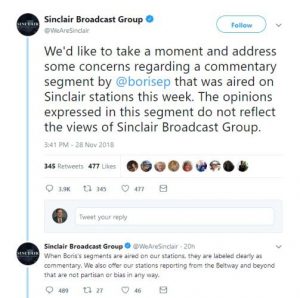 “We’d like to take a moment and address some concerns regarding a commentary segment by @borisep that was aired on Sinclair stations this week. The opinions expressed in this segment do not reflect the views of Sinclair Broadcast Group.”
“When Boris’s segments are aired on our stations, they are labeled clearly as commentary. We also offer our stations reporting from the Beltway and beyond that are not partisan or bias in any way.”

Which would be fine if Epshteyn’s must-run segments unfailingly supportive of the Administration were balanced by commentary from someone who…well anyone who would easily come off more intelligent than Epshteyn, short of a Fox News prime-time host.

No Sinclair, this is your guy – you bought him, you molded him and you force him on your newsrooms whether they want his act or not.

And it does have consequences.

The National Association of Hispanic Journalists said it is reconsidering allowing Sinclair representatives to attend its job recruitment events.

Sinclair’s only comment so far has been the above tweet, no doubt hoping it all blows over.