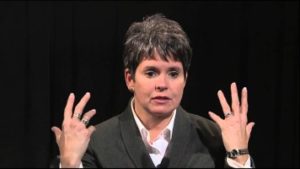 Yesterday we told you of the lawsuit filed by former Nashville anchor Demetria Kalodimos against her former employer, Meredith Broadcasting and WSMV for age discrimination.

Kalodimos was unceremoniously dumped by the station after 34 years with a letter left on her desk by an inarguably spineless station executive, but not before the station allegedly embarked on what Kalodimos said was a systematic campaign create a hostile workplace.

So the Tennessean, never one to pass up a story that paints television in the worst possible light (really, television often needs no help in creating its own PR nightmare), sat down with Kalodimos to allow her to give the farewell she was denied due to her messy departure.

“If I knew that was going to be my last day, you know, I probably would’ve shed a few tears and said a few words to Middle Tennessee,” Kalodimos said in the exclusive interview with the newspaper.

She also said she’d like to be back on the anchor desk one day, and that it would preferably be in Nashville, where she built a life and a career.