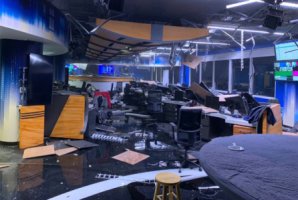 Friday’s Alaska 7.0 magnitude earthquake knocked Anchorage tv stations off the air and forced staffers to improvise to get the news out.

Denali Media’s KTVA was reporting from the city using “Facebook Live,” with staff saying their newsroom flooded and the ceiling caved in. 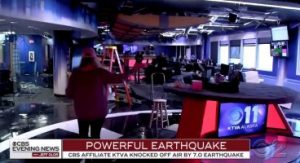 One staffer reported having difficulty breathing from all the “chemicals” and debris in the building as they evacuated while aftershocks continued to shake the region.

One of the more memorable images came from inside a courtroom as the quake was happening.