She’s staying in Bismarck, but her future is evidently not in television. 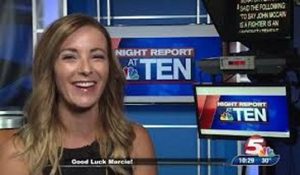 Marcie Bollinger, evening anchor-producer at Gray’s KFYR in this North Dakota market signed off last week after a couple of years, and her send-off by the station’s news director J.R Havens was heartfelt.
“Personally, I appreciate her work with the younger reporters in the news room. Making them better every day. A true leader. She likes to compete and work hard,

It paid off recently when was nominated for a regional Emmy for her work on the BCI undercover investigations. She’s versatile. The ability to go heavy with politics but always saving room in her casts for “cute kickers””

Prior to Bismarck, she worked in Montana, Green Bay and Kalamazoo.

So what is she doing?
“I’ve decided to take on a challenge outside of TV news. Sorry I buried the lead.”
“While I’m stepping away from TV, I’ll still be telling stories, and I’ll still be in Bismarck. I’m excited for what’s to come, and ready to take on a new role.”

We’ll spin the wheel and take “corporate communications” for $500.