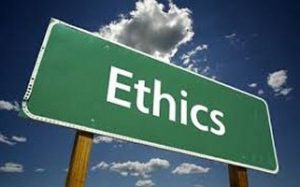 We’ve heard countless times over the past couple of years the empty vows of the Fox News PR machine that this program, that producer or those personalities will be punished for their blatant transgressions of acceptable journalistic standards and practices.

And we’ve noted that nothing ever seems to happen to the folks who have been caught with their ethics down around their ankles.

And we’re not alone.

Margaret Sullivan, the media columnist for “The Washington Post” has noticed the same thing.

[At] Fox News, it’s hard to know what network standards have been breached, whether written rules exist, or who — if anyone — is in charge of that fraught subject.

On Wednesday, I asked two high-ranking Fox News executives about this: John Stack, senior vice president for news coverage, whom I had met at a recent gathering of standards editors and media ombudsmen, past and present; and Irena Briganti, executive vice president of corporate communications for Fox News and Fox Business.

Does Fox News have a written ethics policy, I asked.

If so, is it published anywhere?

Is there a Fox News standards editor, even if he or she doesn’t have that specific title?

What Fox News standard or practice, exactly, was breached in the way the [former EPA administration Greg] Pruitt appearance was handled, and what is the nature of the disciplinary measures being taken?

Neither Stack nor Briganti responded at all.

The network can’t seem to figure out whether it’s an arm of the Trump administration or a news network — or somehow, impossibly, both.

It boasts of its traditional journalists such as Shepard Smith, Chris Wallace and Bret Baier but never seems to come down hard on its blatant propagandists and bad actors.

Trump promoter and vaudeville king Sean Hannity’s appearance at a Trump campaign rally after being told he wasn’t to do it.

And the above-referenced incident in which a couple of producers on the morning “Fox and Friends” were discovered to have allowed the approval of questions and even a script OK to the former EPA administrator.

During the day, Fox News can be a fairly even-handed news outlet.

But at night and in the morning, ethics, and quite often facts, are tossed out with the trash.