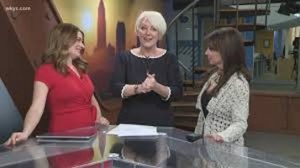 Robin Swoboda, (center) who’s had more lives than a cat when it comes to Cleveland media, is returning to Tegna’s WKYC – with a twist.

This time around, instead of holding forth on the airwaves, as she’s done off and on for the past 33 years in Cleveland, she will show up the WKYC YouTube Channel.
So let’s go to YouTube for the official announcement.

“Going Rogue with Robin Swoboda,” is the name of the program .

For those who have watched her rather interesting career arc, it’s an appropriate name.