Remember back in January when we told you that Nadine Woodward, on her way out as anchor at Morgan Murphey’s KXLY, said she had no immediate plans to run for mayor of Spokane, WA? 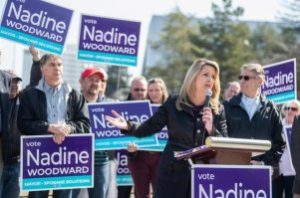 She waited a month after her February sign-off at the station and then….announced her run for mayor.

Evidently to hell with her family video production business, which she said back in January would be her focus once she left the station.

And being coy about it back then meant she got a month of high-profile, reliably flattering plaudits, retrospectives and tearful farewells through the February book.

She’d been anchoring at the station since 2010 when she made her exit and had a broadcast career that spanned three decades.

She had long been rumored to be interested in running for office and has been encouraged to run by some prominent conservatives.