“Today” weather guy Al Roker did his standard throw to local and then…. 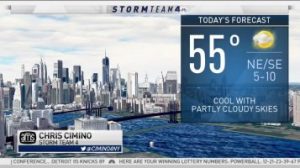 At flagship WNBC, Chris Cimino failed to pick up his cue – instead blathering on about something or other, in the course of which, he dropped an F-bomb.

After another couple seconds of blather, he was abruptly cut off by the familiar NBC chimes, followed by about twenty seconds of silence over a graphic depicting the ten-day forecast.

When the feed cut back to the national show, Roker breezily said “And that’s your latest weather. Savannah?”

So far, he’s still working at the station.