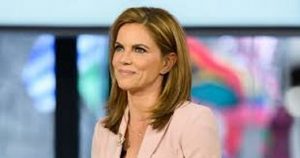 To absolutely no one’s surprise – well almost no one – Natalie Morales made it official.

In a Good Friday news dump, no less.

She’s leaving “Access Hollywood” after three years with the program.

Her valedictory to her coworkers was graceful.

And I do mean family! I have had a wonderful 3 years here with you and will treasure the memories and good times! Thank you for welcoming me with open arms and for always bringing your A-game. I have so much to be grateful for and can’t name all of you… but I do have to especially thank Kit, Scott, Sibley and Liliana for making it always a fun day “at work.” And thanks to our incredible producers, crew, assistants, wardrobe, hair and makeup teams.. I mean truly, I have a long list and hope to thank you each personally. Keep being the little engine that could!

As an “Air Force” brat who has had to say goodbye one too many times in my life.. I prefer to say see you all later … and by later I mean on the next red carpet or on the lot! I’m just a few studio gates away after all. Please stay in touch.

Morales moved to the West Coast to join “Access” and “Access Live” in 2016 after Billy Bush was shown the door after the famous “grab them by the p——y” video with soon-to-be President Donald J. Trump surfaced.

Bush didn’t say it – he just held the mic.

Morales will continue working for NBC News as West Coast anchor for “Today” and as a correspondent for “Dateline.”

Now wait for the official announcement that Mario Lopez will move over from “Extra” to be her replacement.

And for Billy Bush to replace Lopez at “Extra.”