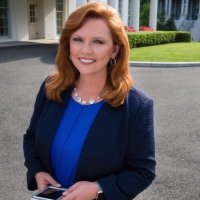 We’re so old we remember when Kelly O’Donnell was a relatively soft-spoken second-level anchor and reporter on what was then WJKW in Cleveland, OH.

If we’d known then…

She was on the air this morning for MSNBC – which didn’t come around until O’Donnell had already put in a couple years with NBC News.

And now she is marking 25 years with the network.

Hey, with the May sweeps here, you really think the network was going to let her silver anniversary slip by without a mention”