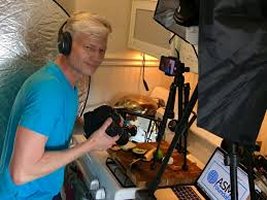 Once upon a time, Russ Ptacek went after discriminatory cab drivers, vermin-filled restaurant kitchens, and more as an aggressive investigative reporter for Tegna’s WUSA in Washington, DC

He did that for five years until, in 2016, he embarked on a life change that was to include a spiritual quest around the world until he felt cleansed enough to return to journalism.”

Talk about getting sidetracked.

While listening to some classical music a year ago, he was hit by something completely out of left field.

“It was almost like I had been drugged with, I don’t know, a sedative that makes you feel content,” Ptacek says. “I had no idea what was happening other than that this music became five dimensional.”

It felt so good he wanted to feel it again.

A quest began that eventually led him to learn about ASMR, which stands for autonomous sensory meridian response: the euphoric, tingly sensation people can feel upon hearing or seeing specific things.

Go to YouTube and you can find ASMR-themed videos some of which, Ptacek says brings up feelings like “the way you would feel listening to the rain pitter patter down as you’re comfortable beneath your covers” and “as though there’s this strong hand giving me a massage pushing up and down my spine in a way that’s almost too much but is actually perfect.”

Thus, a new career path was born – the need to evangelize about ASMR and bring it to the attention of the masses.

Enter the ASMR Foundation, which Ptacek founded this month.

The goal is to compile and endow research about the phenomenon, create videos that will introduce people to ASMR, and experiment with the best ways to record sounds and sights to discover how people are most responsive to the medium.

He’s now a man on a mission.

Where it takes him is anybody’s guess.