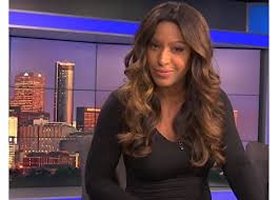 Worth your time is Atlanta tv-radio writer Rodney Ho’s conversation with the departing Sharon Reed.

Reed, co-anchor at Meredith’s WGCL in Atlanta, surprised her colleagues last week by announcing that she is leaving the station May 22.

She says there is a next chapter for her, but she’s not disclosing it at the moment.

Some of our favorite nuggets from the conversation.

On Ella Dorsey, a meteorologist who has faced some clap back of her own over breaking into Masters for tornado coverage and a clumsy exchange regarding a picture of gorillas and Thomas Roberts’ posture: “I’m going to keep my conversation with Ella private. She is a talented meteorologist and story teller. I did tell her that. We did talk about growth. We talk about all kinds of stuff. I love that about her. I don’t respect cowards who seek to undermine or professionally sabotage a colleague when you could simply show courage. Go tell Ella how you feel… She’s tough as nails. Understand that criticism comes with the territory. Sometimes you need to own it. Sometimes you need to ignore it.”

On her boss Steve Doerr, a news director who came in 2017 and worked with her in Cleveland: “I know his patterns. I know his practices. He’s a proven guy in our industry. He came in with enormous challenges. He’ll know how to pivot when I walk out the door. Steve will do what Steve needs to do.”

On her previous co-anchor Ben Swann, famous for conspiracy theories (who now regularly appears as a pundit on RT, a TV network funded by the Russian government.): “I liked Ben. We had a good rapport. I knew we got along because we had an authentic, honest relationship. We are both political junkies. I pride myself on an open mind. If it was something I didn’t agree with, I just said, I wasn’t interested in hearing that. Whatever it was, he was honest with me. It made work fun in that regard and challenging for him in some other ways. Ben is a very skilled broadcaster. Ben’s path is Ben’s path. Sharon’s path is Sharon’s path. The reason we got along is it was a real relationship.”

Say what you will – Reed, however you may feel, has never come off as anything less than her own person