As “New York Times” executive editor Dean Baquet continues his navel-gazing to determine which cable news show are fit to host Times journalists, the debate grows over the inclusion by NBC News of MSNBC’s Rachel Maddow as a presidential debate moderator. 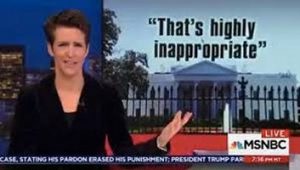 Maddow is quite the lightning rod –being, apparently, Ground Zero in Baquet’s still-not-set-in-stone policy as well as the target of outrage – faux and real – over her projected role in NBC News’ debate plans.

Now why the Times has its knickers in a twist over Maddow’s program but gives “Morning Joe’s” daily salon in hand-wringing a pass is beyond us.

If the concern is over Times reporters appearing on opinion shows, why the disparity?

A casual perusal of both programs’ content will show that more actual journalism is committed by Maddow in any given night than on Joe Scarborough’s morning kaffeeklatsch in any given week.

Sorry, Maddow haters. Deal with it.

As for Maddow’s inclusion as a debate moderator, we honestly have mixed feelings.

She’s an easy target for media critics whose target audience consists of people already predisposed to hate ALL media – except for the prime-time and morning Fox News lineup.

Maddow certainly has a viewpoint which doesn’t make her the pristine blank slate the reflexive haters would prefer.

Hell, these are the same people who worship at the church of Hannity nightly while sending hate mail to Shep Smith and Chris Wallace.

So, in the end, she is a distraction.

But contrary to the judgement of some self-appointed “keepers of the flame,” she is not a “Lefty Laura Ingraham.”

Of course, there is the perception that little separates the two.

But again, Maddow’s conclusions in her extended pieces are based on solid research – not necessarily the conclusions viewers want to hear.

And the lazy acceptance of the “Perception is Reality” trope is – well, simply not acceptable.

That said, Maddow’s continued inclusion in the moderator lineup will simply allow the screamers to scream – and cloud the actual content of whichever debate she presides over.

Which is a shame.