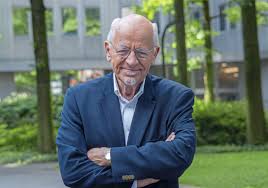 After 37 years and somewhere in the neighborhood of 11,000 stories, veteran KDKA reporter Ralph Iannotti signs off after one last assignment and for the last time tonight.

Back in 1982, when he joined the Pittsburgh legacy station, Iannotti thought he was going to spend three years in harness, then head back to Albany, NY, where his tv news career began in 1976.

The future holds travel, recreation and, well, whatever he wants.

“I am so very lucky to have been here,” he said Thursday, not long after a couple in Pirates black-and-gold walked through Gateway Plaza and wished him the best on his retirement.

“It’s a decision of my own making, and I just thought it was time,” he continued. “I will miss the adrenaline and the deadlines, but I won’t miss being out in the snowstorms.”

Below, a career highlight retrospective….

KDKA anchor Susan Koeppen said Iannotti’s “ability to work a story, get information from his sources, and provide exclusive information to our viewers is what makes him such an amazing reporter. He has been a rock star at KDKA for more than three decades for a reason.”