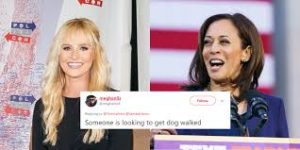 The blondifully-vapid Tomi Lahren issued another one of her ridiculous tweets and it was too much for even her female colleagues at Fox.

The baseless, ugly claim Harris slept her “way to the top”  quickly brought the wrath of several of her fellow Fox female colleagues. 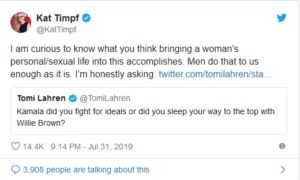 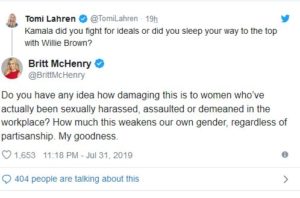 And early Thursday morning, Fox News meteorologist Janice Dean also took Lahren to task, writing: “If a male contributor had tweeted this they would probably be suspended with a trip to HR. Pretty disgusting, Tomi. Are clicks and retweets worth demeaning women? Would you do the same to a ‘conservative’ female candidate?”

“I apologize for my comment on Kamala’s personal relationship. It was the wrong choice of words. There are many other things to take her to task for and I will stick to those,” she wrote in a statement.