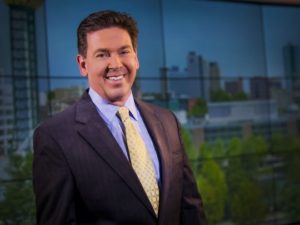 Down Knoxville way, some fans of discarded WVLT meteorologist David Aldrich was up against it.

So, they started up a “Go Fund Me” campaign to help Aldrich out.

We reported back in April when Aldrich, along with morning anchor Bob Yarbrough were shown the door at the Gray station because the station was, say it with us, ‘headed in a different direction.”

Whatever the hell that means.

The “GoFundMe” campaign, called “Set David Free,” was created with the intention of supporting the nine-year chief meteorologist and his family because a “non-compete” contract is keeping him from working at other stations in Knoxville.

But kids, it’s not as dire as it might seem.

Aldrich has a non-compete, sure….but he also had a severance package from the station the ran until July 19th, three days before the “GoFundMe” campaign was launched with a goal of raising $15,000.

The goal of the campaign has shifted from helping the Aldrich family get through the non-compete period to raising money to retaining an attorney to protect his legal rights.

Yeah, non-competes in general suck, especially when the person saddled with it was fired by a station that didn’t want him anymore, but doesn’t want him turning up across the street.