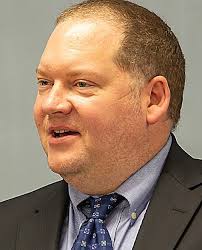 Jason Wildenstein is the newly-named general manager of Sinclair’s WJAC up the road from us in Johnstown, PA.

It’s a return to the Keystone State for Wildenstein who has work experiences at three Pennsylvania tv stations under his belt, from master control operator in Harrisburg to newscast director in Allentown and production manager in Scranton-Wilkes Barre and is a Pennsylvania native.

In between he worked in Alaska and Florida, most recently as GM of WTXL Tallahassee, Fla.during the Raycom era.

Everybody is thrilled and excited.

Steve Marks, EVP–COO of Sinclair’s television group, said: “We are thrilled to have Jason join Sinclair. With his years of experience as a general manager, and over 20 years in the industry, we are confident that he will be a fantastic addition to the team.”

“I’m extremely excited to be joining Sinclair and the very talented team at WJAC,” said Wildenstein. “I’m looking forward to living and working in West-Central Pennsylvania, serving the amazing communities there and contributing to the growth of the station. My family and I are thrilled to return home and be closer to family, as we are originally from Pennsylvania.”