First you hire them.

Then use them for a while.

Then, when you feel they have outlived their usefulness, bench them. 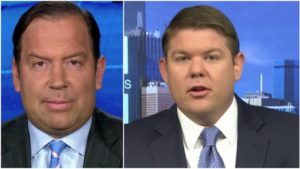 That seems to be the case with commentators Steve Cortes (left) and Ben Ferguson (right),

Cortes hasn’t been seen on the network in more than a month and Ben Ferguson hasn’t been on since April, but both are still paid contributors.

“They just won’t book him,” a former CNN contributor said of Cortes. “They’ll just pay him. They won’t fire him, because that’s just blatant. But, they won’t book him, and they’ll tell all the producers not to book him.”

Cortes’ absence from the network appears to follow an explosive segment on “Anderson Cooper 360” during which he accused fellow CNN contributor Wajahat Ali of bigotry after Ali said Cortes was cozying up to white nationalists.

Everybody at CNN so far has zipped lips.