The behind-the-scenes shuffle amped up at “CBS This Morning” with the appointment of a new director (Shanta Fripp), a new managing editor (Claudia Milne) and a new senior broadcast producer (Jon Tower). 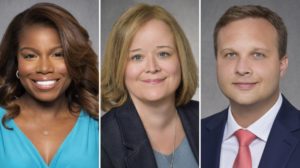 Fripp moves up from her last position as the director of “CBS This Morning: Saturday.”

She joined CBS in 2001 as an assistant in the market research department and has since held several roles.

The former senior editor of video at ProPublica, Milne is joining “CTM” as the broadcast’s managing editor, beginning Sept. 3.

For the last five years, Tower has been a member of the “CBS This Morning” overnight staff prior to his promotion to senior broadcast producer.

He has more than 15 years of experience developing and running live news shows, including a decade at MSNBC as a senior producer for “Morning Joe.”

Now let’s see if the changes result in some ratings success.