It really was about the only high-profile recourse she had post-White House. 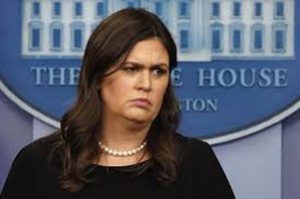 Former White House Press Secretary Sarah Huckabee Sanders’ reward for a fairly consistent record of obfuscation and press-bashing/bullying is a job as a Fox News contributor.

She spent nearly two years at the White House before leaving in June.

Sanders will provide political commentary and analysis across all of Fox News Media, including Fox News Channel, Fox Business Network, Fox News Digital, Fox Nation and the radio/podcast division, according to the network.

She begins her new role on September 6.

Meantime, one of her many predecessors in the press job, Sean Spicer, is limbering up for his role in the upcoming season of “Dancing With The Stars.”