The AJC’s Rodney Ho reports that Meredith’s WGCL in Atlanta is moving around the newsroom chess pieces to fill empty spaces left by the departures of anchors Sharon Reed  and Thomas Roberts, and the elevation of Shon Gables into the Reed chair. 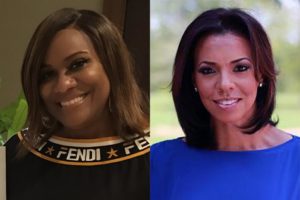 Tracye Hutchins (right) is moving to afternoons to co-anchor the 5 p.m. newscast with a rotating set of co-anchors while the station seeks a second permanent late afternoon/evening anchor.

Hutchins has been with the station since 2007, the longest-tenured anchor there.