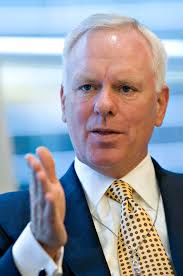 John Lansing, former news director at CBS-owned WBBM and former president of Scripps Networks, will be the new CEO of NPR.

While his 90’s tenure as ND in Chicago was brief, Lansing moved the station away from the “if it beeds, it leads” school into a more measured realm of journalism.

At NPR, he succeeds Jarl Mohn, who announced in December that he would step down this year after leading the organization for five years.

He starts next month.