We’re still scratching our heads over what passes for the thought processes of CNN bookers and their producer bosses in the wake of their latest “coup.” 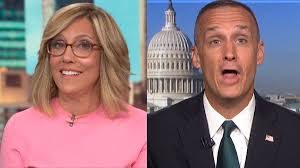 Less than 24 hours after former Trump campaign manager Corey Lewandowski admitted that he has “no obligation to be honest to the media” while being caught lying red-handed, CNN brought on the pugnacious Trump loyalist for an interview that predictably went sideways.

Appearing on CNN’s “New Day” on Wednesday morning, Lewandowski and anchor Alisyn Camerota spent a frustrating and headache-inducing 16 minutes going round and round over his contentious and combative testimony before the House Judiciary Committee.

The lengthy CNN segment, in fact, basically came across like a microcosm of Tuesday’s hearing—lots of deflection, insults, contradiction, and condescension.

CNN kids, we realize you people have 24 hours to fill with something, but you really have no obligation to put proven – and proudly self-acknowledged – liars on the air.

Do you think you’re going to shed any light?

Do you think an anchor could accomplish in an area where a gaggle of preening members of Congress and their vastly more competent aides failed?

Let’s call it “Zucker Syndrome” after the mystifyingly-still-employed boss of the once respectable cable network.

It was Zucker, you will recall, who gave copious amounts of air time to the 2016 Trump rallies, running them wall-to-wall with generous amounts of shots featuring an empty podium prior to the actual start of the rallies.

This while other candidates went begging for even a small interview here and there.

It was all about ratings, he later admitted.

And that is most assuredly what CNN’s Lewandowski sideshow was about.