The door that revolves between tv newsrooms and government offices continues to revolved, this time in Philadelphia. 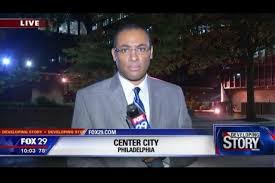 After eight years as morning reporter for Fox-owned WTXF in Philadelphia, PA, Dave Kinchen is packing it in to move into a job as communications manager for Philadelphia’s Office of Violence Prevention.

The office was created in 2017 by Philadelphia’s mayor.

This is a reversal of his career back in 2004 when he left government roles in Michigan for television newsrooms in Saginaw and Detroit.

Presumably he will also have a little bit more time to devote to two podcasts he created earlier this year, one focusing on news and the other all about rock music.

He’s gone by the end of the month.