After the midweek allegations that disgraced former “Today Show” host Matt Lauer raped a co-worker, a contentious staff meeting took place that was described as “heated” and “disastrous.” 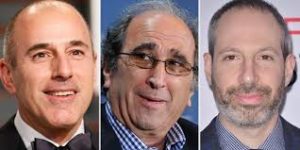 The latest Lauer news came in the form of an excerpt from Ronan Farrow’s still-to-be-released book, titled “Catch and Kill: Lies, Spies and a Conspiracy to Protect Predators.”

Additionally, Farrow revealed, NBC executives including NBC News president Noah Oppenheim and NBC chief Andrew Lack may have had knowledge of a disturbing rape accusation against Lauer long before he was dismissed from the network.

So Thursday, during the regular 9 AM editorial meeting, network employees, including star reporter Pete Williams, peppered Oppenheim with tough questions about the bombshell revelations.

According to multiple employees present on the call, staffers demanded specific answers about when management knew about the Lauer misconduct claims, and confronted Oppenheim on why NBC decided against hiring an outside investigator.

One employee declared to the boss that “we deserve answers from you.”

One staffer pointedly asked Oppenheim: “Did she [Brooke] use the word ‘assault’ when she reported this?”

The network president allegedly “deflected,” a source said, and did not answer the question, citing a need to protect a “person’s confidentiality.”

Oppenheim did not have answers for some of the staff’s most pressing questions.