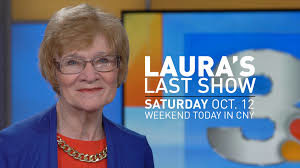 “Weekend Today” anchor Laura Hand signed off for the final time at Sinclair’s WSTM over the weekend.

She was one of the nation’s first female journalists and the first in the Syracuse market when she joined WSTM in 1972.

Since she announced her impending retirement back in August, it’s been a laundry list of tributes, reminiscences and…well…cake.

On her final broadcast, she was joined at the desk for the emotional moment by her colleagues, including Niko Tamurian, Wayne Mahar, Matt Mulcahy, Megan Coleman and Lisa Spitz.

In her honor, the WSTM studio has been rechristened the “Laura Hand Studio.”