The boss’ six-page memo excoriating the reporting and character of “Catch and Kill” author Ronan Farrow be damned. 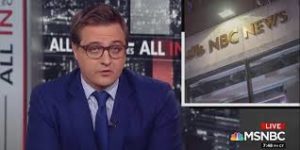 MSNBC host Chris Hayes has broken with memo author Noah Oppenheim (as president of NBC News, he is Hayes’ boss.)defending Farrow’s reporting in his new book.

“It’s the kind of journalism that you want to do as a journalist, that everyone who works in this business should want to facilitate,” Hayes said on his show, “All in with Chris Hayes.”

And that is the kind of comment expressly designed to put one of the boss’ sh*t list.

“As we’ve said since the moment he was fired, [Matt Lauer’s] abuses should never have happened. Ronan Farrow’s book takes that undeniable fact and twists it into a lie — alleging we were a ‘company with a lot of secrets.’ We have no secrets and nothing to hide,”  claimed Oppenheim.

He had more to say about Farrow: “Now that we’ve read Farrow’s book, it’s clear — his smear rests on the allegation that NBC’s management knew about and took steps to hide Matt Lauer’s misconduct before his firing in November of 2017. Without that, he has no basis on which to rest his second conspiracy theory — that his Harvey Weinstein reporting was squashed to protect Lauer.”

That last bit drew a shot from Oppenheim’s employee.

“One thing is indisputable,” Hayes said. “Ronan Farrow walked out of NBC News while working on the Weinstein story and, within two months, published an incredible article at The New Yorker that not only won a Pulitzer but helped trigger a massive social and cultural reckoning that continues to this day.”

Hayes said that “the insidious destructive force of the path of least resistance is everywhere you look. Heck, I feel the tug of it myself as my own news organization is embroiled in a very public controversy over its conduct.”

Oppenheim and NBC News CEO Andrew Lack and fighting for their jobs and their reputations.

It’s probably too late for both.