Could we finally have an alternative for those often-dangerous, regularly-derided outdoor live shots by meteorologists and tv news reporters during storm events? 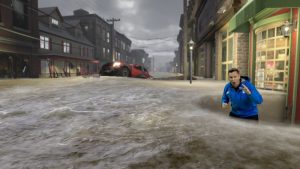 For the past two years, The Weather Channel has plowed a bit of $$ and effort into something called immersive mixed reality.

In part, the effort is due to the need to “feed the beast” across all platforms, a herculean task.

“It’s all about getting away from the flat map,” says weather presentation director Michael Chesterfield.

And here is an example of how it looks.

Standing in a street with rapidly rising waters, The Weather Channel meteorologist Chris Warren is imploring drivers to steer clear of flash floods.

Moments later, as if to prove his point, a car floats by.

Instead, he’s being taped in front of a green screen in the network’s studios in Atlanta, and the dangerous flooding is being added via visual effects in real time.

This is a PSA.

But as the technology improves, by next year, TWC wants to feature immersive mixed reality in 80% of its on-air programming.

Further down the road, we can see this being employed as a means of illustrating real-time storm coverage (clearly labelled, of course) to keep crews out of harm’s way.