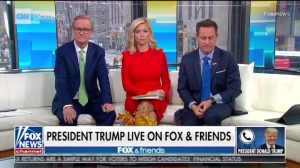 In a lengthy and rambling interview on “Fox & Friends” last Friday, Mr. Trump accused the Three Dumbest People on Television of lying when they said they didn’t know the identity of the Ukraine whistleblower.

“No, I don’t believe,” Trump replied. “I don’t think Steve has ever told a lie, Ainsley and Brian, in his life, but that one I’m sort of thinking, come on,”

In another section of the 53-minute near-monologue, Trump promoted the long-debunked conspiracy theory that cyber company CrowdStrike helped the DNC fabricate Russian hacking during the 2016 election, prompting host Doocy to attempt to scramble to get the president to walk it back.

“They have the server from the DNC, Democratic National Committee,” an agitated Trump yelled. “The FBI went in and they told them, ‘Get out of here! We’re not giving it to you.’ They gave the server to CrowdStrike or whatever it is called, which is a company owned by a very wealthy Ukrainian. And I still want to see that server. You know, the FBI has never gotten that server. That’s a big part of this whole thing. Why did they give it to a Ukrainian company?”

For the record, CrowdStrike is not owned by a Ukrainian.

Well, you have to hear the whole damn thing to believe it – and enjoy the varied expressions of the Three Dumbest People on Television as they endure it.